“Turbans is a powerful and compelling film … [that] delivers a
moving, complex examination about the tough choices mae
for the sake of cultural and religious assimilation.”

“Andersen does not flirt with the significant issues of tradition, culture and identity.
She cuts deep into our own psyche … and makes her vibrant memoir
disturb and illuminate pertinent issues of our time.”

“An important and intimate jewel of a film …
a must-see for our immigrant families.”

“Poignant, heart-breaking … an adroit juxtaposition
of the breathtaking verdant beauty of the setting with the harsh realities of racial intolerance…” 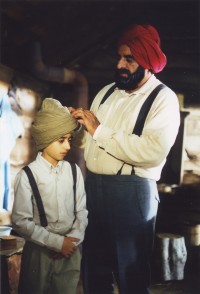 “NONE OF THE ABOVE: PEOPLE OF MULTIRACIAL HERITAGE”

“An unusually charming, winsome examination of the lives of
people of mixed heritage, whose tales are told with gentle humor and clever insight.”

“A touching and illuminating documentary,
offering valuable insights into a sensitive and important subject matter.”

“Thought-provoking … includes revealing interviews
with people of mixed race, including herself.”

“This timely video will sensitize families and communities
to a distinctive aspect of cultural diversity.”